WHY DO I NEED GAUGES?

IT’S SIMPLE – Gauges help you keep your engine running in top condition and can help prevent problems from happening.  In other words…to Protect Your Performance!

We all know some of the problems engines can have. Too much boost can grenade it. Not enough oil pressure can fry the bearings. Too lean and it can ruin an engine and too rich can make it lose power.  Your engine could be too cold or you could be pushing too hard.

Gauges let you keep an eye on your engine’s condition, helping find small problems before they become big ones.  When you want the best performance for your engine, they’re an extremely useful tool.

Safety and performance are what gauges are all about.

WHAT DOES EACH GAUGE DO?

Let’s go through them one-by-one to see how they can be used. 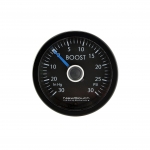 Let’s go through them one-by-one to see how they can be used.

A boost gauge reads how much boost pressure the turbocharger or supercharger is making so that they can be set at a desired and safe level. Running too much boost could cause massive damage your engine, leading to piston failure. This gauge can help you diagnose boost leaks which can be just as troublesome and harmful as overboosting. 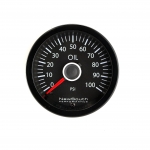 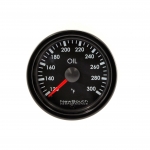 Oil temperature is one of the most important things to know, especially for turbocharged cars. You can cause damage by racing or running your engine hard before is it warmed up.  High oil temperature can be caused by stressing or loading the engine too hard. Engine oil can lose its lubricating properties and cook if it gets too hot. This can cause coking of the oil inside the turbocharger and lead to an expensive failure. 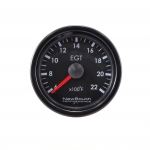 Also called a pyrometer, the EGT gauge is used to monitor the exhaust gas temperature of an engine and is particularly useful for turbocharged engines. Running too hot for extended periods of time can lead to engine failure.

When used for tuning an engine, the EGT gauge can show if you are running rich, hot, lean or cold. Running lean can mean that you need to adjust your fuel pressure or timing.  Running cold can mean unburned fuel possibly indicating an ignition or timing problem. 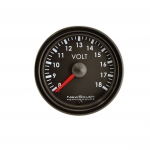 A voltmeter gives you a measure of your car’s electrical system.  While driving, your voltmeter should read between 13-14V.  A reading below that can mean a bad, loose, or undersized alternator or a bad cell in your battery.  Below 12V means you are not charging and you have got a major electrical failure. Anything above 14V can harm your electronics as they are designed to run at no more than 15V.

This website uses cookies to improve your experience while you navigate through the website. Out of these cookies, the cookies that are categorized as necessary are stored on your browser as they are essential for the working of basic functionalities of the website. We also use third-party cookies that help us analyze and understand how you use this website. These cookies will be stored in your browser only with your consent. You also have the option to opt-out of these cookies. But opting out of some of these cookies may have an effect on your browsing experience.
Necessary Always Enabled
Necessary cookies are absolutely essential for the website to function properly. This category only includes cookies that ensures basic functionalities and security features of the website. These cookies do not store any personal information.
Non-necessary
Any cookies that may not be particularly necessary for the website to function and is used specifically to collect user personal data via analytics, ads, other embedded contents are termed as non-necessary cookies. It is mandatory to procure user consent prior to running these cookies on your website.
SAVE & ACCEPT